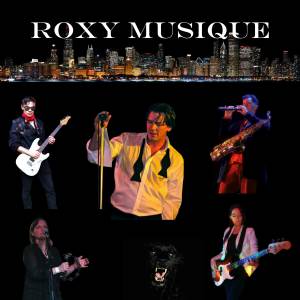 Roxy Musique is the definitive tribute to Roxy Music, the 'most influential band of all time'. Roxy Musique deliver a two set show, with set one exploring Roxy Music's daring and creative repertoire from 1972-75 and set two targeting the later hit singles and giving the audience the chance to 'dance away the heartache'.

Fans of Roxy Music's early period will be treated to such sonic delights as Virginia Plain,Pyjamarama, Street Life, All I want is You, and Love is a Drug, and fans of the later period will be thrilled with tracks like Angel Eyes, Same old Scene, Over You, and Take a Chance With Me.