Phil Okwedy's The Gods Are All Here 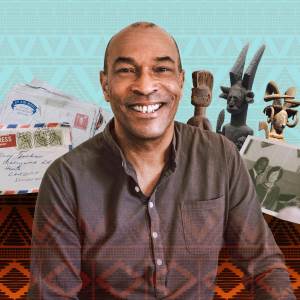 A chance discovery in an attic sparks fascinating family story with folk tales and legends.

Welsh Storyteller Phil Okwedy, and producers, Adverse Camber in association with Theatrau Sir Gâr, have united to share an incredible story about a chance discovery, revealing a chance discovery about his own past and family history. The Gods Are All Here will tour across Wales this May and June, and later again in autumn 2022.

The Gods Are Here explores equality, freedom, racism, family and growing up without your birth parents, in a touching, funny and evocative performance, The Gods Are All Here is both timeless and very much a story of now.

Sparked by the discovery of a series of letters from his father in Nigeria to his mother in Wales, The Gods Are All Here is a compelling, lyrical and warm, one-man performance from first-class storyteller, Phil Okwedy.

Phil’s captivating performance skilfully weaves myth, song, folktales and legends of the African diaspora with an astonishing personal story that uncovers Phil’s experiences of growing up as a child of dual heritage in 1960 &70’s Wales.

Born in Cardiff, Phil never lived with either of his parents but was raised in Pembrokeshire by his long-term foster mother. Charting the time of life when children are said to view their parents as gods, but never having lived with them, in this show, Phil considers if his parents were, in fact, the gods he had imagined them to be…

Phil said: “As I developed as storyteller, there came a time when I felt ready to tell myth but could find none that resonated with me. So, I began to weave personal and family stories with folktales as a kind of myth-making exercise. When I found the letters in my mother’s flat after her death, I felt a need to do more with them than just read them but I was not yet a storyteller and so had no idea what that might be.

Now, in sharing this show my intention is that it resonates with other people, with their individual family stories but also with the audience as a whole, because it is by working together that we ensure that equality, justice and freedom are experienced by all.”

Phil Okwedy is a storyteller and writer, who has performed at many storytelling events and festivals across the UK. He has recently been commissioned as part of Literature Wales’ Representing Wales, Developing Writers of Colour programme and as a major contributor to National Theatre Wales Go Tell the Bees project.

Executive Producer of Adverse Camber, Naomi Wilds, said: “We are so delighted to have the chance to bring Phil Okwedy’s The Gods Are All Here to Welsh audiences in 2022. Phil is such an engaging storyteller and his story lifts audiences from wherever they are to 1960s Wales, and onto an amazing voyage of discovery, with glorious stories from the African continent, all in one captivating evening. Now is the right time to be hearing these stories and giving this talented storyteller the platform he deserves!”

The show is suitable for ages 12+. Phil who is also an engaging workshop leader will be running workshops and talks along with the show, plus an opportunity for groups and schools to develop their own creative writing skills and revealing more about the show.

For further information about the tour please visit https://www.adversecamber.org/

The Gods Are All Here has been funded by Arts Council of Wales made possible by money raised by National Lottery players. Theatrau Sir Gâr is supporting production development, with director Michael Harvey and a team of production professionals, including designer, shadow producer and technical team.